With an initiative that highlights the importance of international cooperation, HHRM continues to realise its vision for continuous improvement of the framework and knowledge in the safety of Offshore Oil & Gas Operations in the Mediterranean region through the exchange of best practices and experience.

On Friday, December 4, HHRM hosted the Mediterranean Offshore Authorities Forum with the participation of the Competent Authorities for Offshore Safety from EU Mediterranean Countries (Croatia, Cyprus, Greece, Italy, Malta, Spain and Portugal), the Department of Public Works of the Ministry of Transport, Communications and Works of Cyprus and the Cyprus Hydrocarbons Company.

HHRM CEO, Mr. Aristofanis Stefatos welcomed everyone to the meeting and thanked all the participants for their interest in the event. He acknowledged the fact that HHRM has signed MoUs with many of the participating countries and that this forum shall be the beginning of many fruitful collaborations in the future. He expressed his wish that this forum will serve as a platform to facilitate the exchange of information on safety aspects, the discussion of technical developments in member countries, and exchange of ideas and experiences. He also expressed his interest in making this Forum a formal entity in the future and touched on the dynamics and challenges of the industry:

“As Europe paves its way into the future, the accessibility to energy resources such as natural gas the recognized transition fuel, becomes of critical importance. The security and diversification of our energy resources serves the best interest of all Europeans. Today, at times when the industry is facing unprecedented challenges, it is our chance, if not an obligation to join forces and cooperate even more dynamically towards the common goal of the development of the sector to the highest standards. There is a legacy of knowledge and experience in the field that can be applied across industry in many other sectors”, Mr. Stefatos noted.

The welcome was also extended by Mr. Joerg Koehli, the Head of Upstream Oil and Gas Team of the European Commission, who highlighted the importance of collaboration between competent authorities and mentioned that meetings of the EU Offshore Authorities Group will also hopefully resume in the near future.

The Secretary General, of the Ministry of Environment and Energy, of Greece, Mrs Alexandra Sdoukou, welcomed the initiative with the following statement: “I commend HHRM's initiative for creating the forum of the competent authorities on offshore safety of the EU Mediterranean member states. Dialogue and exchange of expertise have always been the driving forces for progress and development. Finding a common ground for communication between countries, in order to meet common challenges and goals, is an essential step for success. The technical experience and specialisation that HHRM continues to acquire through such initiatives classifies it among those organizations which will assist in the development of new energy projects and infrastructure in Greece, but even more importantly it can also benefit our neighboring countries in similar endeavours”.

The participants and the main topics of the forum

Ms Vlatka Vanicek, from the Croatian Hydrocarbon Agency discussed the issue of Conversion of an Offshore Facility to an Underground Gas Storage facility. She mentioned the main considerations with regards to reservoir type and the use of existing infrastructure, as well as their experience in Croatia with Underground Gas Storage. The new UGS project in Greece was discussed by HHRM CEO, Mr Stefatos, and a new CCS project in Ravena in Italy was announced by the Italian representative.

Ms Katerina Plati from the Department of Labour Inspection of Cyprus discussed the issue of the Requirements of Standby Vessels during offshore hydrocarbon activities. It was highlighted that it is not a requirement of the Offshore Safety Directive but that it is good practice to have one or two standby vessels during exploration drilling, and also during the production phase, which was seconded by the colleagues from Portugal.

Ms Katerina Kostaki from HHRM discussed the issue of Financial Capacity and Liabilities, and the requirements imposed by the Offshore Safety Directive and national legislation. The types of guarantee were discussed, as well as the methods of estimating the levels of financial assurance for operations. Finally, memberships in industry pools such as OPOL (OPOL (The Offshore Pollution Liability Association) were discussed, as well as best international practices. The representatives from Cyprus, Malta and Italy also commented on the insurances and the methods for estimation in their respective countries.

Roberto Cianella, Ministry of Economic Development of Italy: Calculating the cost of decommissioning

Mr Roberto Cianella from the Ministry of Economic Development of Italy discussed the issue of Decommissioning Costs. He presented the process of decommissioning of an offshore platform, and analysed the costs involved for the permanent plugging and sealing of wells, and for the removal of the installations. The differences in costs calculated in the Uk were mentioned by the Greek representatives, as well as the possible reasons for this deviation. The intention of Italian authorities to continuously monitor plugged and abandoned wells in the future was mentioned, following a comment by Mr Koehli from the European Commission. Mr Stefatos also discussed the high standards and technologies for plugging and abandonment of offshore wells used by industry nowadays.

Finally, Mr Stelios Zervos from the Ministry of Transport, Communications and Works of Cyprus discussed the issue of the safety of submarine pipelines and their regulation. He mentioned the regulations that apply in Cyprus, the establishment of a Committee on Submarine Pipelines, as well as the timeline for submission of applications to the Competent Authority. He stressed the importance of adopting a goal setting approach, with the aim to reduce the risks as low as reasonably practicable. A question was raised by the Greek counterparts about the competent authorities in other countries regulating the pipelines that fall within the safety zone of 500m from an offshore installation, which was elaborated on by the participants from Italy and Malta.

As a conclusion, all participants agreed on the importance of organising discussions between the Competent Authorities and that such initiatives should continue in the near future, hopefully with the physical presence of participants. 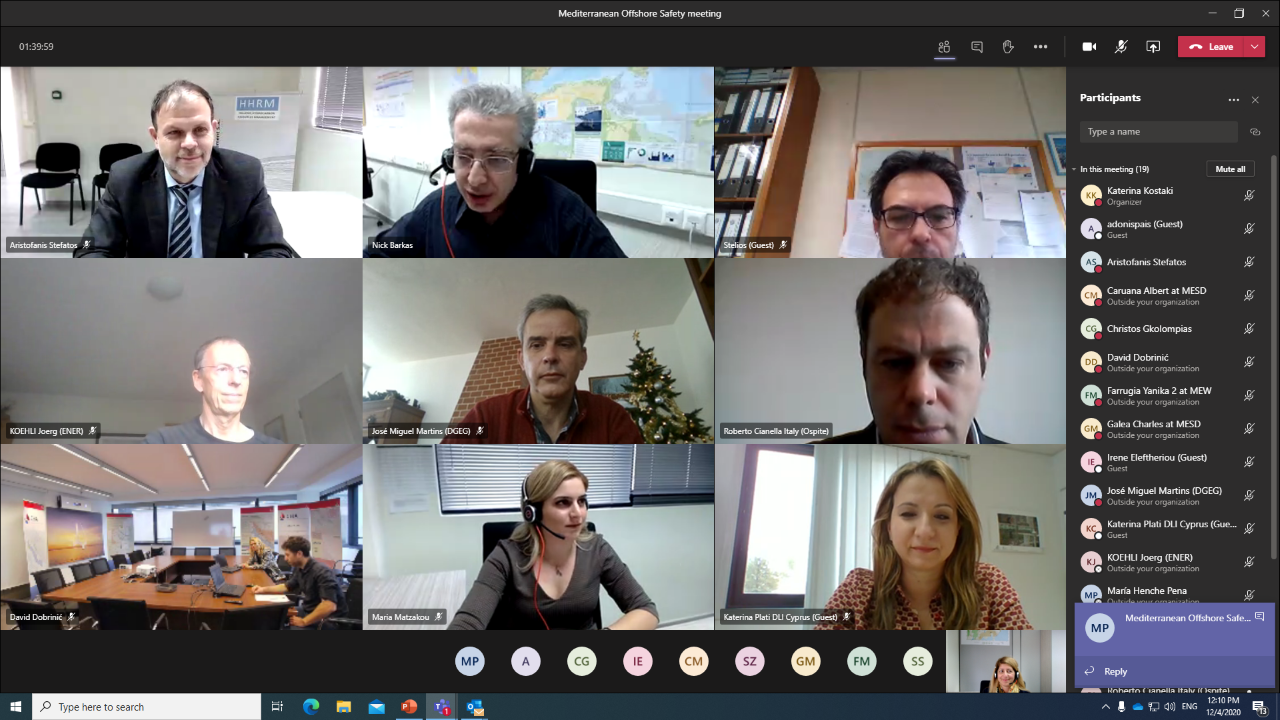